Awards and Messages of Support

The NSW Office for Veterans Affairs was honoured to receive two awards at the Prime Minister’s Veterans’ Employment Program Awards 2018 on behalf of the NSW Government.

We thank all our veterans for their service, and are proud to support veterans to find meaningful and sustainable employment.

Leadership in Recruitment of Veterans As the Acting Minister for Veterans, I am a proud supporter of the NSW Government’s Veterans Employment Program which assists veterans transitioning out of the Australian Defence Force.

The Program is designed with two key aims – to communicate with veterans about working in the NSW Public Sector, and to build a network of collaborators who advocate for the transferable skills veterans bring to the workforce.

The Veterans Employment Program was extended in November 2018 for a further four years, with the Premier setting the Public Sector a target of hiring an additional 1000 veterans by 2023. I am pleased to say the NSW Government is on track to meet this target, and I look forward to seeing the Program continue to excel in supporting NSW’s servicemen and servicewomen. 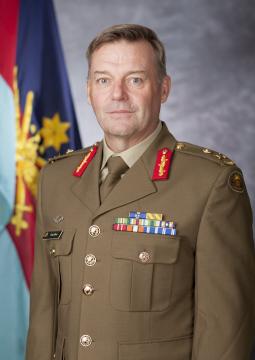 As the Commander Forces Command, I can personally vouch for the skills that Australian Defence Force personnel have acquired during their period of service to our nation. They have much to offer prospective employers, in a range of different fields and in varying roles.  The New South Wales Government's Veterans Employment Program continues to function as an important link between our veterans and those employers keen to seize the opportunities that come with having former Australian Defence Force Personnel as part of their team.

I commend the program for the outstanding progress achieved to date and for the ongoing support provided to the New South Wales community. It is fantastic to see this incredibly valuable program extended for another four years, with a new target of linking an additional 1000 veterans with worthwhile employment opportunities, by 2023. I encourage both veterans and employers to make full use of the program website and to take advantage of the range of significant opportunities that are on offer. As Commander Australian Fleet, based in Sydney, I have had the privilege to observe the development of the NSW Government Veterans Employment Program (VEP). I would like to commend them for their outstanding achievement in establishing the program and assisting 824 veterans to find work in the NSW public sector.

Extending the VEP for a further four years, with a new target of helping an additional 1000 veterans to find work by 2023, is truly commendable. I understand veterans, young and old, sometimes find it challenging to articulate skills and attributes they have obtained throughout their Australian Defence Force (ADF) service. The VEP website, provides assistance for Veterans transitioning from the ADF, can assist them developing applications, and highlights opportunities within the NSW public sector.

Having been the recent Commander of the 7th Brigade, I realise the importance of assisting Defence personnel with and during transition. They have so many skills and attributes which are often misunderstood by Hiring Managers and taken for granted by the members themselves.

NSW Government Veterans’ Employment Program (VEP) is to be congratulated for their excellent achievement during the Centenary of Anzac. Assisting 824 veterans to find work, or be offered a new role in the NSW public sector, is a mammoth achievement.

I am pleased to see the VEP has been extended for a further four years with a new target of helping an additional 1000 veterans to find work by 2023. This is a fantastic program and I encourage all veterans to have a look at the VEP website and use the tools and information to their advantage. Air Command has several thousand current veterans with different experiences and backgrounds that create the tremendous diversity underpinning our Air Force. With that diversity comes different needs, as well as the different skills and knowledge of each and every veteran. I therefore applaud the tremendous initiative of the NSW Government Veterans Employment Program (VEP) in assisting our veterans transition to a life outside the military, where they can continue to serve the community with the same dedication and skills that they have developed over their military careers.

I was particularly pleased to learn of the extension to the VEP out to 2023 with an admirable goal of assisting a further 1000 veterans to find work in the NSW Public Sector. Not only does this program stand to enrich the lives of our ex-service women and men, but it will benefit the people of NSW by retaining the skills, knowledge and experience of Australian veterans. Thankyou on behalf of the women and men of Air Command.

As a Veteran I strongly recommend anyone who is thinking about, or has discharged, check out the NSW Government Veterans Employment Program Website.

It will help them understand how to market their skills and attributes they have obtained through their Defence service.

When I transitioned, I wasn’t really sure where to start and I can see the benefit of the program.

I would like to take this opportunity to express my support for the New South Wales Government’s Veterans Employment Program.

Australian Defence Force (ADF) personnel receive extensive training and experiences which produces men and women who are uniquely skilled and highly competent. Despite this fact, there remains an inaccurate perception that ADF members’ skills are not easily transferable to the civilian sector.

Your education campaign will surely drive a subtle yet significant shift in recruiting practices to ensure military people are not disadvantaged when applying for roles within the New South Wales Government.

I believe the Veterans Employment Program will be highly beneficial to both veterans and employers alike, and fully encourage the outcomes it seeks to deliver.

As the former Commander Joint Logistics and the former Co-Chair of the Defence/NSW Government Consultative Forum, I congratulate the NSW Government Veterans’ Employment Program (VEP) for their excellent achievement during the Centenary of Anzac. Assisting 824 veterans to find work, or be offered a new role in the NSW public sector, is significant and reflective of the substantial talent and employability of Defence veterans. I also congratulate the VEP on being extended for a further four years with a new target of helping an additional 1000 veterans to find work by 2023. This is a fantastic program and I encourage all veterans to have a look at the VEP website, during, or post their transition from the Australian Defence Force.

I am proud to be the NSW Minister for Veterans and unequivocally support the NSW Veterans Employment Program (VEP) in its continued efforts to help ensure the NSW Government benefits from the skills and experience veterans gain during their military service.

The VEP's focus on collaboration and diversity is supported by a growing network of advocates across the NSW Public Sector, including senior executives, hiring managers and human resource personnel. The Program continues to develop its initiatives to engage with veterans and find effective ways to support them in their career transition from the Australian Defence Force.

The NSW Government made a commitment in November 2018 to extend the VEP for a further four years. I’m very pleased to say that the Program is currently on track to meet the Premier's goal of supporting 1000 veterans into Public Sector employment by 2023, and I look forward to supporting the VEP team as they move into this next phase. I am very proud to launch the Veterans Employment Program with Australian Defence Force veteran and Minister for Veterans’ Affairs, the Hon. David Elliott, MP.

On 3 March 2015, I committed to a post election target of employing 200 additional veterans into the NSW public sector by 2019.

Accordingly, the Veterans Employment Program was established to achieve this target. The program is run by a dedicated team committed to employing veterans across the NSW public sector in areas where their unique skills are in highest demand.

For more than a century, the ADF has been known for producing highly skilled and highly competent men and women, unquestioning in their loyalty to our country, and in their commitment to the achievement of global peace and security.

While the service of Australia’s military men and women has, and continues to shape Australia’s history and identity—from the courage and heroism shown by our diggers at Gallipoli, to the annual commemoration of Anzac Day—the deft skills and experiences that former ADF personnel can bring to civilian workplaces is less known.

I am proud that New South Wales has, during the Centenary of Anzac, positioned itself as a leader in the recognition of the service, skills and attributes that our veterans can offer employers.

I thank all current and former members of the ADF for their service to our country, and sincerely ask that they continue their service by considering working for the people and state of New South Wales. I am proud of the Veterans Employment Program and the excellent work they have been doing to assist veterans searching for employment in New South Wales. The Government, made a commitment in March 2015 to help 200 veterans find meaningful, sustainable employment across the NSW public sector by 2019. Since launching, 824 veterans have either found work or been offered a new role in the public service – far exceeding the Government’s target. The program continues to inform human resource departments and hiring managers across all clusters and improve the understanding of the skills and attributes veterans bring to our Government.

The team is congratulated for winning two Prime Ministers Veterans Employment Awards: Leadership in Recruitment of Veterans and Veterans’ Employer of the Year Public Sector. They continue to lead the way in Veterans Employment assisting Federal, State, Local and Non-Government organisations.

Copyright to the Office of Veterans Affairs, NSW Government © 2018

Search over 2,000 memorials in NSW by name, suburb, postcode or veteran name